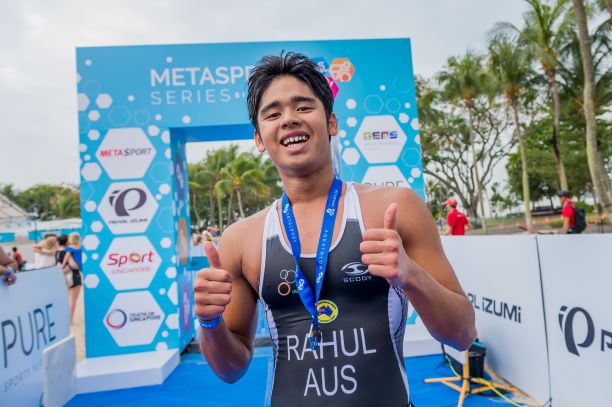 Posted at 01:30h in Human Stories by nurul

The MetaSprint Series Aquathlon Champion, Rahul Jegatheva, is returning on Sunday 9 February to defend his title. His 2019 win took most triathlon followers in Singapore by surprise. However, if you had heard about Jegatheva before, you knew his win was not a fluke. And it was not by accident either. We asked this talented and focused young man a few questions to get to know him better.

Could you introduce yourself please. How old are you? Where are you from?

My name is Rahul Jegatheva, I just turned 18, and I am a first year Bachelor of Biomedical Science student at The University of Western Australia (UWA). I’m very proud of my high school as well, Perth Modern School.

I arrived in Perth when I was two and a half years old, and have been here since. I was born in Johor, however, and used to visit Singapore every weekend. And, if you want to delve deeper into my background, I have Korean, Indian, Japanese, Chinese and Sri Lankan ancestors!

How did you end up taking part in Aquathlon races? And when did you realise you had some potential?

For many years I was a pure swimmer, first taking part in the nationals in pool swimming, then moving to open water swimming, primarily the 5km distance. When I was 14, I took part in the West Australian School Sport Cross Country championships, and finished in the top-5 with basically no running training. That’s when I decided to give running a go. My dad noticed that no other swimmer was a top-5 runner and vice versa. He thought I would do well in something that combined the two disciplines and introduced me to the North Coast Triathlon Club, which has a 12-races Aquathlon series yearly. That’s how it started.

You have won three national Aquathlon titles in three consecutive years. Which one do you treasure most and why?

The first one, which was the Richie Walker Aquathlon at Gunnamatta Bay Park in Cronulla, New South Wales. I won the 19&U National title, and a major highlight was being able to race against legendary multiple world champion ironman, Craig Alexander.  I was still new to the sport and didn’t know how I’d go, so it was fantastic.
(ed.: Yegatheva was only 15 years old when he won the 19&U title. At 17 years old he won the senior title and followed into Craig Alexander’s footsteps.)

What made you decide to take part in the MetaSprint Series Aquathlon earlier this year? How do you remember this race in Singapore last February?

It got my attention, when I saw Metasprint Series T-shirts worn by my teammates, James Allen and Ewin Liam, at the UWA Triathlon Club.

I had a great day, as my grandpa and grandma from Kuala Lumpur had never seen me race and came down to cheer me on. My aunt came as well which was an extra bonus. Hopefully they can attend again in 2020.

I really enjoyed the race.  It was a good course and the event was extremely well organised.

You have also qualified for the national championships for triathlon, pool & open water swimming, track & cross-country running. What are your big sporting goals for the near future?

Yes, I did qualify for all those events, and I took part in most as well. However, it was qualifying that was the goal, and, if I took part, I aimed for a top-10 finish. For the Aquathlon events, however, my goals at the Nationals have always been to win my age group and to finish top-3 overall.
I also competed in the World Championships for Aquathlon three times and finished twice on the podium.

No journey is without challenges. What has been yours and what have you learned from them?

The biggest challenge would probably have been trying to balance everything. In high school, I was targeting getting into medical related fields, so the Year 12 exams in Australia were critical. I basically started to focus on that in Year 10 (if not earlier).

A current struggle is how and when to add the bike into the mix. Due to my focus on the Year 12 exams, I made a conscious decision to forego bike training and focus on swimming, running and studying. This is still a challenge in my first year of Uni.

My most challenging race was at the Junior World Championships in Denmark in 2018. I was two minutes late for the race briefing the day before the race and was given a 15-seconds penalty that I had to serve at the start of the race. I spent 24 hours worrying about it. Then seeing the other competitors flagged off while I was held back for 15 seconds was horrendous. I am thankful that I somehow managed to get back into the middle of the swim pack by the end of the swim (in 6th for the Junior category) and then ran down everyone else except the winner to take the Silver in the Junior category. It was one of my biggest challenges, but also one of my best races.