Sprint finishes and stars of the future at Sentosa! 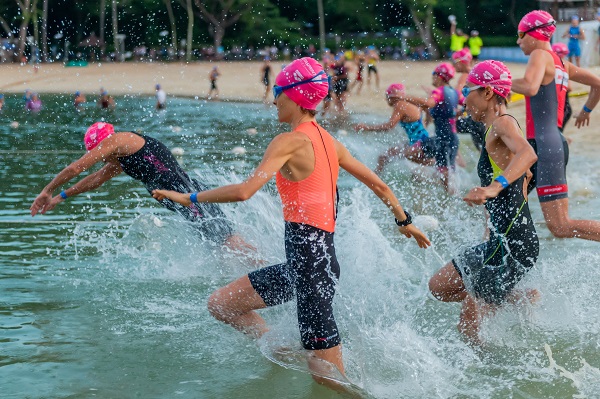 15 Feb Sprint finishes and stars of the future at Sentosa!

13 February, 2022 The storm clouds departed and sunny skies beamed down on beautiful Palawan Beach, as smiling athletes arrived eager to kick off their 2022 racing season at the MetaSprint Series Aquathlon. In what was a step towards normalcy, the Elite Wave and Equaliser returned to the MetaSprint Series.  The youthful energy of Singaporeans Bryce Chong, Luke Chua and Nicholas Rachmadi shone bright in the Male Elite race, as they fought out their own battle on the course. Event emcee Jeremy Ratnam summed it up saying “What a finish! I don’t think so in all my years of commentating the MetaSprint Series I’ve seen a trio of gentlemen race towards the finish line”.

Chong had an early 25-second lead after the swim, but Chua and Rachmadi were on the hunt. Over the course of the 5km run they shaved all but 0.6 of a second off that lead, and all three men stormed into the finish chute together. Less than one second separated the three, with Chong holding strong and taking the victory in 29:20.94. Chua took silver (29:21.56), and Rachmadi bronze (29:21.62). Rachmadi commented “I knew I had to take the run out early, so around 2kms I made a surge and got a 5-second gap on Luke, but he didn’t go away. I knew it was going to be a sprint finish between us, but we kept the pressure on and managed to catch Bryce, but not successfully pass him. I think it’s good, being chased and chasing someone – it’s a good way of racing”.

In the women’s elite race, it was the experience of Kiwi Tanya Lee-Parker which showed through. She led from the swim where she had a 1 minute 20 second advantage over the British athlete Suzie Bacon, and nearly 3 minutes over Itsuko Tanaka from Japan. The Kiwi didn’t have it her own way though, with super runners Bacon and Tanaka firing on all cylinders over the 5km course and catching up over a minute each. But it wasn’t enough, and Lee-Parker crossed the line comfortably with a 1 minute 3 second win over Bacon, with Tanaka another 45 seconds back in third. Lee-Parker commented on the return to a more normal style of racing “it was great to be back racing properly again, without having to wait till the end of the weekend to know how you’ve placed. It was really good, really fun.”

Special mention goes to 17-year old Frenchwoman and star of the future Clemence Chomienne, who flew under the radar by starting in Wave 9, posting the fastest female finish time of the day (34:29), 53 seconds ahead of Lee-Parker. Watch out for the next race ladies! Covid-19 safe practices were implemented everywhere, and the 1,000 registered athletes raced in 50-person waves starting with two athletes every ten seconds. The Sprint athletes were able to choose their timeslot, meaning that athletes who raced over the 750m swim and 5km run distance were on tenterhooks until lunchtime to see if their performance was enough to score a podium in their age category. The Discovery distance consisted of a 250m swim and 2.5km run, with many first-timers using the race to begin their multisport journey. In the men’s race it was Koh Sheng Kai who led the way finishing first in 15:03. Jerron Chua took second place in 15:12, and Kit Xuan Kok took third in 15:27. The women’s race was won by Candace Chang with a finish time of 16:11, with Nikki Lovati second (18:10) and Mayada Demashkieh third (19:04).