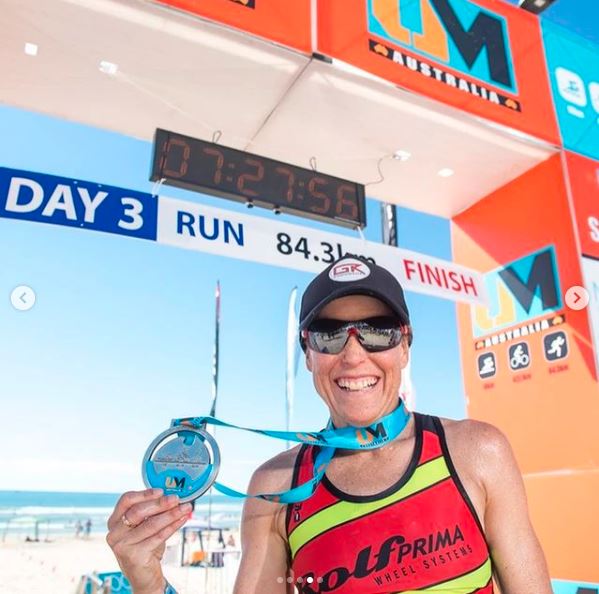 “It is hard to believe it has been 10 days already! But it has taken that long to truly reflect on my Ultraman Australia experience. 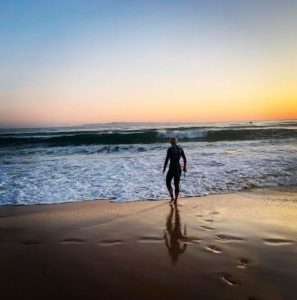 I made it! I was so grateful to be standing on the beach ready to start. Despite all the stress / lockdowns over recent weeks in Western Australia it was happening!

I was SO nervous! I had expectations and goals I wanted to achieve. Would the body come to the party!

I felt pretty good during the swim and loved having Guy paddle for me. He told me to relax, smile, gives me a thumbs up and feeds me at regular intervals. I didn’t have to think about anything other than swimming.

It generally felt good! But when I got out of the water I was disappointed to see the time. 2.49hrs

That was 12-15mins slower than the last 2 Ultraman events I have done and I was confident I was in better swim shape.

I felt a bit better later when I found out apparently we were dealing with some pretty strong currents particularly in the second half of the swim.

I just had to forget it and move on, there was A LOT of cycling and running coming up over the next three days!

Out of the swim and my amazing crew were so organised! Guy was busy dragging the kayak up the beach. Mel & Ruth were helping me quickly get changed, bike shoes on, lathered with suncream, food in my mouth and I was on my way.

The first section was quite busy with a lot of cars and traffic. It WAS mid morning downtown in Noosa on a Saturday!

But it didn’t take long to get out on some quieter roads and on the first significant climb I saw my crew go flying past.

At that point my legs were feeling really heavy and flat. I was concerned if they stayed that way it was going to be a LONG 3 days!

But thankfully after about an hour they started to feel much better.

I got myself into a groove of steady on the climbs, rolling with it on the downhills, aero and strong on the flats.

My crew were everywhere! Stopping constantly with plenty of food and hydration. They made sure I wasn’t carrying too much on the steep climbs ( therefore less weight) and were also tracking everything I was eating and drinking.

I felt good! And as I descended back into Noosa I was pleased with how the day had gone. Crossing the finish line with a new Bike course record and overall Day 1 record.

A quick mandatory medical check showed I had lost less than 1kg then Ruth timed me in the ice bath! 🥶

Back to the accommodation for a shower, massage, Recovery Boots and lots of food! It was time to carbo load and get ready for what I believed to be the longest day.

Meanwhile, my crew made sure the minivan was packed and loaded sufficiently with nutrition, spare clothes, spare bike parts, maps, snacks/lunch. You name it they had it 🤣 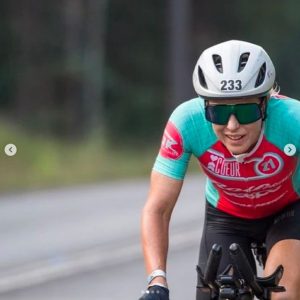 This has always been the longest day for me in the previous events I have done.

The first time I really suffered on Day 2 due to lack of calories and maybe not quite enough time in the saddle during training.

The second one I rode well on Day 2 but then suffered on Day 3.

Would I be able to find that balance this time? 🤷‍♀️

We started in the dark all together and had an escort for about the first 10km through town – then it was ON!

I wasn’t going to make that mistake and focused on my own effort.

Over time the group sorted itself out.

I was lucky to have ridden most of the Day 2 Bike course with Luke and Beth Mackenzie early last year when I thought I would be doing the event in May 2020. So I knew what I was in for with 2300m of climbing.

Just like the previous day my goal was to climb steady, trying not to burn any matches then strong and aero whenever I could.

Again my crew were incredible! They were everywhere! I was an eating and drinking machine!

In fact I had put ON 2kg by the end of the day.

But I am sure this was a contributing factor as to why I felt good and rode consistently.

Crossing the finish line I was stoked to learn I had broken the Day 2 Bike course record but there was no time for celebrating. I had to get this mind and body ready for a double marathon the next day. 😩🤞 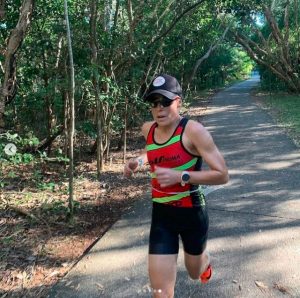 There is no denying – this day scares me the most! Running that far anytime is hard, but doing it after the previous 2 days of racing adds an entire new element to it.

I woke up the most nervous I had been since we started Ultraman Australis – what was going to happen today? How was my body going to feel? Respond? It was all an unknown

Before leaving for the start line I got on my laptop and looked back at all the run training I had completed over the last 6 months. I had enlisted the help of Mick Francis to prepare me for some Ultra Distance road / trail events and had been running the most consistently in years. I knew I had it in me.

It was quite surreal starting in the dark, but I loved it because that is my favourite time to run. I felt a little stiff to begin with and the Hamstrings were tight (Guy told me later I looked a little awkward!) but I knew once I warmed up and settled in it would be okay.

The first 5km is a no feed zone so now crew allowed, which was fine as there was a group of us that had settled into a similar pace and were chatting together like a weekend long run – I was enjoying it!

The run course in Noosa has 500m of elevation gain….it is rolling for the first 10km along the coast – really quite beautiful with the sunrise over the ocean.  It was just about this point after checking my time up until then that I said to Guy “I think I need to slow it down a bit” 🙂

So I let the group go and settled into what I hoped would be more of a sustainable pace for longer.

My pacers Guy and Ruth were swapping out around 2km at a time and making sure I was constantly eating and drinking, keeping the calories up. There was still a long way to go!

Meanwhile Mel was driving the minivan and trying to locate us at various points along the course. The path we run is not always accessible by car, so a rough estimation of pace and how far I would get was needed quite often.

About 27km in you hit a nasty steep climb! So nasty that Guy said I was best to walk it and he was right! My walking pace would have been close to my jogging pace. It was also a good opportunity to eat, drink and compose myself.

The rest of the way to the halfway point (42.2km) was relatively flat and there was a little “yippee” to myself as I made the turn! Now to bring it home!

That was a lot easier than it sounded 🙂

One of the good things about heading back was seeing everyone else on the course and the cheers and camaraderie between athletes and crew. It had been a long 3 days and we were nearly there. 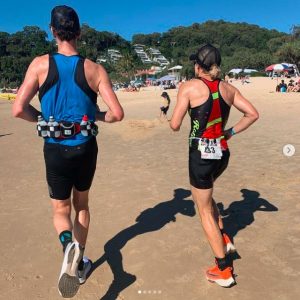 At 57km it was time for a walk again up the steep climb. This was a no feed zone. My pacer at the time – Guy, was allowed with me but the rest of my crew had to detour around to the other side. This was about the time where the internal mind games became even more important. Constantly telling myself “stay strong, stay focused, you’ve got this!”

I started doing some calculations in my head of what my final run time might be.

Before I had started at 5.30am in the morning,  based on what I had done previously I had 3 possibilities going through my mind.

Ruth and Guy were swapping out more regularly during the last 21km, making sure they had caffeine with them to bring me home. We weren’t saying too much as I was focusing on one foot in front of the other and trying to maintain a good rhythm.

I have this thing where I always break the last 4km of any event into 10 x 400m. I was still moving okay – steady and consistent and I knew I could hold it until the end.

There was one little challenge left though and that was running the last 400m along the beach! REALLY????

Ruth and Guy joined me and as we approached the finish line Mel ran the last few hundred metres. 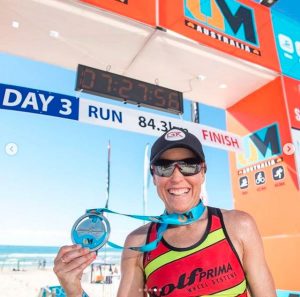 There was a wave of emotional relief as I hugged my crew and thanked them for everything! We did it!

Anything can happen over an event of such magnitude. 3 days is a lot of time for things to go wrong. To have finally put together a consistent performance that I knew I was capable of still makes me smile just thinking about it.

I came away with the overall course record by nearly 90mins.

Everyone is asking me now – What’s next??

But it is a little too soon for that 😂

I have enjoyed a week off, and have slowly started moving the body again this week.

But one thing’s for sure – I am already excited for the next adventure, whatever that may be! “