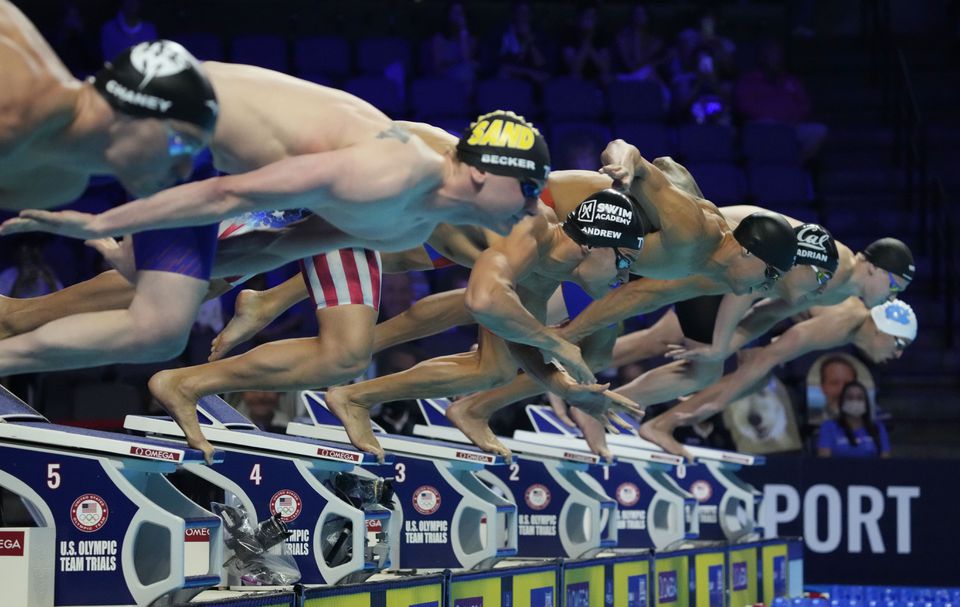 Posted at 02:28h in BLOG, Sports Updates by Metasport Admin

The Tokyo Olympic Games have kicked off, and what a start it’s been! We have been inspired by 13-year old skateboarders, cheered for the underdog in Women’s Road Cycling, celebrated with coaches of swimming gold medal winners, and left aghast with start-line blunders of a monumental scale.

Who wasn’t sitting on the couch screaming at the television as the Austrian Anna Kiesenhofer rode solo to the finish line, off the radar of the chase pack in the Women’s Road Cycling race? The maths teacher, an amateur cyclist proved to the world that self-belief can carry you to a gold medal without the big team support that is relied upon by so many.

The world loved the celebration dance by the coach of Aussie swimmer Ariarne Titmus after she beat American Katie Ledecky. Dean Boxall’s jubilation was all the funnier because of the female volunteer who was trying in vain to ask him to calm down and put back on his mask!

In its debut at the Olympics, skateboarding is gaining a new wave of followers. And it was Japan’s Nishiya Momiji, the pocket rocket, who stole hearts winning the street skateboarding.

While skateboarding is meant to have bumps and jumps, the start of an elite Triathlon event is meant to be smooth. It wasn’t to be for the Men’s event on Monday morning, with the start horn sounding while a media boat was in front of half the field. As the organisers learnt the hard way, the best plans can fall flat without the right execution.
The Men’s and Women’s Triathlon events have now been completed, and what a difference a day makes! The men sweltered in scorching conditions on Monday, while the women woke to rain and wind Tuesday morning thanks to nearby Typhoon Nepartak.

Both races started in similar fashion, with a solid swim leg by the favourites sending a small pack of leading athletes onto the bike course.

In the Men’s race this lead pack was eventually caught by the chase group, leaving a large group of athletes to enter T2 together. A foot race ensued over the 4-lap, ten kilometre course. Slowly the favourites dropped off the pace, with Frenchman Vincent Luis an early casualty. Then there were three; Kiwi Hayden Wilde, Norweigan Kristian Blummelfelt and Brit Alex Yee. It came down to the final lap, and Blummelfelt took off. His strength showed as he steadily increased his lead all the way to the blue carpet where he crossed the line and collapsed, exhausted but with a gold medal victory. Yee took second, and Wilde third.

The women’s race saw the lead pack stay away in the cycle, with six athletes 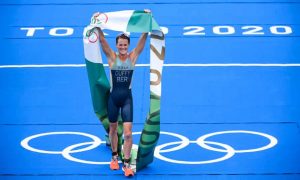 heading to transition together. Team GB’s Georgia Taylor-Brown had a puncture in the last kilometre and dropped ever so slightly off the pace – one is left to wonder what could have been if she had entered transition with the leaders. Out of transition Bermuda’s Flora Duffy and the American veteran Katie Zaferes quickly took the lead. It was Duffy who attacked early, with Zaferes unable to respond. Duffy lengthened her lead over the four-laps and never looked challenged as she strode her way to victory. Taylor-Brown recovered the time-gap lost due to her puncture and ran her way to silver, with Zaferes taking bronze.

The final event on the Triathlon program is the Mixed Team Relay on Saturday. We look forward to seeing what spectacular action it will bring.

The Mixed Team Relay
An exciting addition to the Triathlon schedule for the Tokyo Olympics is the Triathlon Mixed Relay. The race format was created by the ITU (now World Triathlon) in 2009 with the aim of inclusion in the Olympic Games, expanding the presence of triathlon at the Games, adding a team element, and allowing for more triathletes to attend (which is a hot subject since the Olympic Committee is trying to put a limit on this since the Rio Olympics).

Thanks to the mix of genders, team element and super short race distance, this race format has proven to be a sporting spectacle with great suspense. A Triathlon Mixed Relay team consists of 2 male and 2 female athletes, starting in female-male-female-male order, with each athlete completing a mini triathlon of 300m Swim, 6.6km Bike and 1km Run (yes the race has 12 legs – 4x swim-bike-run!). The racing is explosive and dynamic with lots of position changes. The winning team must be truly all-round, with male and female athletes that excel in the three disciplines of swimming, cycling and running.

The top-favourite is the three-times World Champions – France, with Team GB and USA the main candidates to complete the podium. However, there are a host of countries, like Belgium, Norway and Germany that will feature at or near the front of the race at some point.