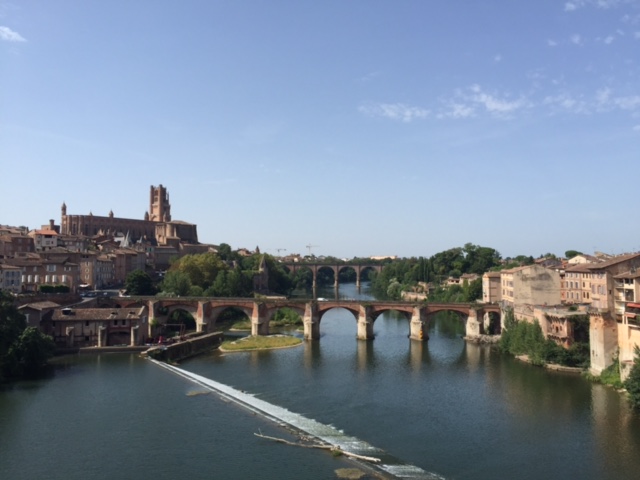 Posted at 09:09h in MS Race Report by meliza.tan

With the Time Trial done and dusted on Thursday, the focus has turned to the road race and over the last two days the town has filled up with over 3,000  qualifying riders, here to compete for the coveted rainbow jersey. Plus, at least the same number of supporting family members and friends of the riders.

Arriving in Albi, you can’t fail to impressed by the scale of the place, including a quite awesome brick cathedral dating back to 1282 which dominates the skyline. The medieval city is well off for accommodation, restaurants, and bars; and the main square provides a focal point for the race and various festivities which have been laid on especially for the event. The town was really buzzing on Friday night as riders arrived and started to soak up the atmosphere ahead of the race on Sunday morning.

Having been to the last three Grand Fondo World Championships, I’m always surprised by the global reach of the sport of cycling. With the finals held in Europe this year, it seems to have attracted an equal number of competitors from the eastern and western hemispheres. Strong representation from US, Australia, New Zealand, UK, France, Belgium, Spain, and Italy – as well as a healthy number of Asian based riders, thanks to Tour de Bintan being a designated qualifying race for the 2017 series.

With temperatures soaring into the mid-30’s Centigrade, a lot of competitors seem to be focused on conserving energy in the run-up to race day. Getting out on the course is certainly more pleasant earlier in the day and there was a healthy number of riders taking a look at key sections on Saturday morning when the Specialized Roval Mavericks contingent rolled out. Anyone whose ridden their bicycle in France will feel immediately at home on the seemingly endless web of D-roads that criss-cross the country. You never seem more than 10km from a sleepy village, an impressive Bastide, or some other interesting feature on the route. And it is this distinctive geography that provides the backdrop for the 2017 race around Albi; a 155km route with two key climbs at the 55km and 100km marks where selections will surely be made. The course recce simply confirmed what we already knew – aside from the two main climbs, the course was rarely flat and heat/hydration would play a major factor in deciding the outcome of the various age-categorised races. 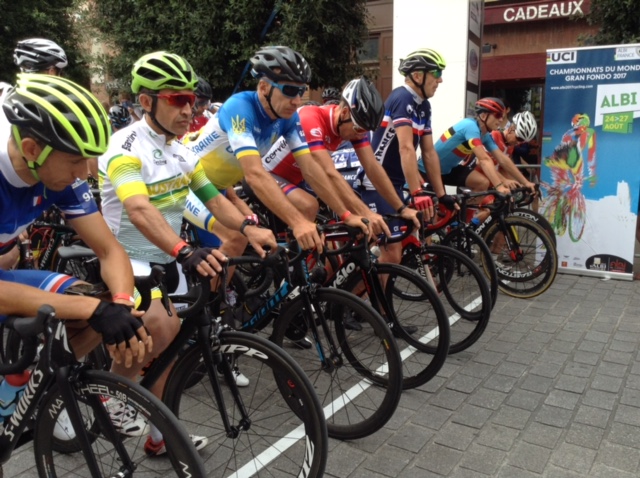 Sunday morning came around and riders were pleased to see a thin layer of cloud cover as we gathered in the narrow cobbled streets of Albi ahead of our respective start times. I have to say, it was rather chaotic but you don’t really expect anything else when 3,000 racers are squeezed into one place, each person dealing with their pre-race nerves, last minute toilet breaks and tactical adjustments in their own way.

As 9.00am approached, the first peloton (Male 19-34) rolled out from the start line, closely followed by older male age groups and then a full contingent of female riders, also split into age-based categories.

If you didn’t realise beforehand, the first 20km of these events soon makes you realise you are competing in a world final. The pace is intense from the gun, the pelotons are huge, and you need to be hyper-alert just to make sure you stay upright. The run along the Tarn valley was flat and fast with a couple of nervy moments as the peloton squeezed past various bits of road furniture. Being near the front obviously reduces the risk of getting caught up in an incident and you can draw some amount of comfort that everyone present is a proficient rider, well used to riding in a bunch.

The pace didn’t let up as we got out into the countryside. A small climb at the 20km mark was gobbled up with no major splits in the field. The pace only eased off as we neared the first major climb of the day at 55km; riders not keen to lead the group onto the 3km hill. There was a bit of jostling for position as some of the bigger & more powerful riders tried to make some early ground but with a steep initial pitch, it quickly became clear that the pure climbers had a huge advantage in this race. Gaps opened immediately and despite a reducing gradient towards the top, major selections were made that were never recovered later in the race.

Considering the fairly steep and convoluted ascents, the downhills were fairly manageable, with one or two exceptions they were generally long and shallow run-offs back to valley level. Of course it was fast; so fast that even small gaps would persist right to the base of the descent where your chances of making it back to the group were more dependent on the peloton deciding to sit up rather than your own endeavours to chase back on.

The section between the two climbs was probably the most picturesque of the day, with the sun now shining strongly it was rural France at its best. The only downside was that it was passing in a blur because the pace was still very much on. It’s a curious thing about these Grand Fondo World Championships – even though there is no team orders, there is still a desire from riders to try their luck, attack, and for others to keep the pace high at the front. It’s down to the ultra-high quality of the field – these top amateur age-group riders are there to battle it out and they aren’t interested in taking prisoners – and a succession of riders find themselves ejected from the bunch with every passing kilometre.

The second climb of the day was equally destructive for many riders. A similar length and gradient to the first but the addition of some tired legs just enhanced the effect on the various bunches. The race really exploded at this point with only the top 20-30 riders in any age group able to stay in contention for the top prizes.  The rest of us had to find allies on the road wherever we could, and try to work together to limit damage to overall placings and minimise time gaps. Now three hours into the race, the impact of fairly amateurish feed stations was beginning to take its toll and there was plenty of suffering being experienced by a large number of competitors.

The only saving grace for the hot and thirsty riders was that the 40km run in to the finish had a slight downhill trajectory. I’m sure it made for some exciting racing at the front but even the second and third pelotons were content to manage their efforts and save something for the final half-lap at the racetrack in Albi. At the 153km mark we turned off the road and onto the wide expanse of tarmac that surrounds Albi’s airport. It provided a fantastic finale for the race, not just for riders who battled it out in a succession of exciting sprint finishes, but also for spectators who’d turned out in their hundreds to welcome the riders home. It’s a scene that provided a fitting epitaph for the Albi event – the French passion for cycle racing, the incredible global reach of the event, and the sight of so many friendships being re-kindled as riders recounted tales of their race day experiences.

Overall, the race in Albi was a worthy finale to the 2017 UCI Gran Fondo World Series and I’d thoroughly recommend participating in future events if you have the means to do so. With a qualifying event in Asia courtesy of Tour de Bintan, its now a realistic goal for many Asian-based riders to compete against the best amateur riders in the world in a UCI sanctioned event. Next year’s finals will be held in Varese, Italy, which will also host a qualifying event on 30 September – 1 October 2017.