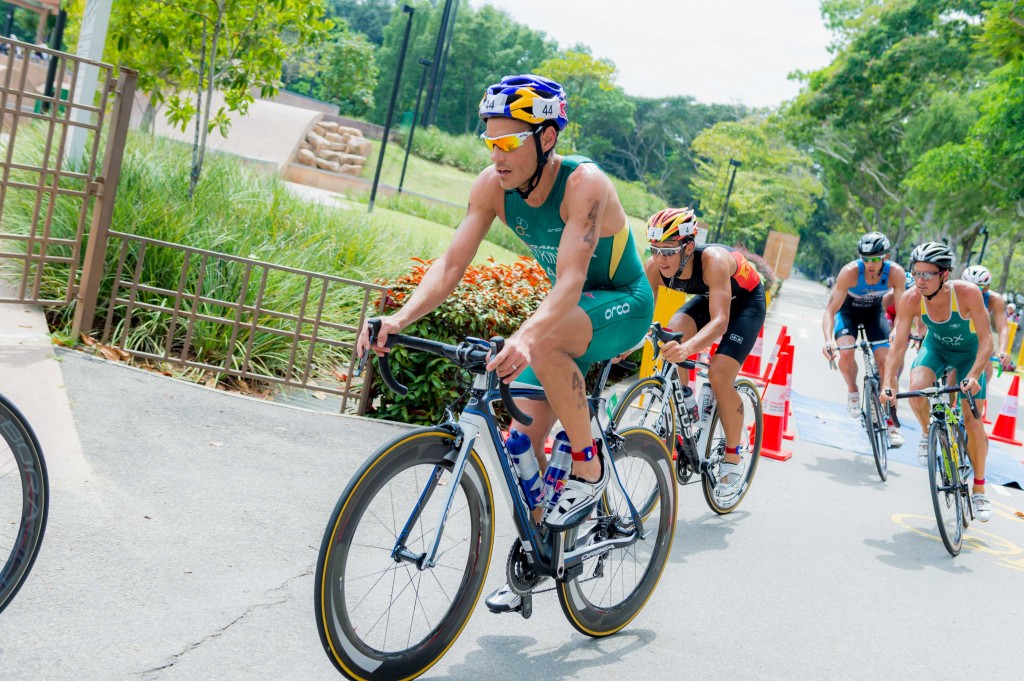 ITU veteran Courtney Atkinson of Australia held off his young compatriot Drew Box to claim the Elite men’s title on Saturday in what was the highlight of a superb weekend of racing at the 2014 Singapore International Triathlon. Japan’s Aol Kuramoto claimed the women’s Elite crown.

No stranger to these shores, 2008 Singapore Triathlon champ Atkinson, 35, started as one of the favorites for the elite title, but the mostly younger guns lined up beside him on the beach showed no fear and were eager to claim the scalp of one of the sport’s superstars.

A pack of some 10 athletes came out of the somewhat murky and choppy water together after the 1.5km swim, and ITU racing being draft legal, the winner was always going to come from this group. Despite a few attacks, the mini-pack stayed together for the six laps of 6km that made up the bike course for the Standard Distance event. On a hot but not oppressive morning, the athletes took to the shady paths of the East Coast Park with gusto for the 10km run. Atkinson and Box quickly separated themselves from the rest, and then the double Olympian used his experience and strength to pull away from Box to take the title by 18 seconds. His winning time was 1:49:52. In third place, and some two minutes further back, was Zheng Xu of China

The women’s Elite race saw a smaller group of just four athletes exit the water, with the Chinese trio of Mengying Zhong, Lingxi Xin and Xiaoting Ma joining Kuramoto. Like in the men’s race, these four worked well together on the bike and were also joined by Mikala Falconer of Australia who put up a sterling effort on her bike to make up a 90-second deficit in bridging across.

It was Kuramoto and Zhong who started the run strongest, though, and it was actually the Chinese athlete who opened up a slight gap during the first two laps of the four 2.5km loops the elite athletes ran. But Kuramoto powered through on the third lap and ended up taking the title by a comfortable 45-second margin in a time of 2:04:03

In total, over 2,000 athletes gathered at the East Coast Park venue for the two days of action the 2014 Singapore International Triathlon entailed, with the vast majority taking part in the various races for age groupers, the heart and soul of triathlon. Before the elites competed on Saturday morning, it was the turn for those aiming at the Sprint, Youths, Juniors and Kids titles.

The men’s Sprint champ was Guillaume Rondy who covered the 750m swim/18km bike/5km run course in a time of 1:03:22 for a dominating victory. While the fact that the men started in four different waves made it difficult for all the contenders to race head-to-head, Rondy’s two-and-a-half-minute winning margin over runner-up Matthew Jones leaves no doubt that the champ was in a league of his own. Third place went to Resat Vargin Yeke.

Racing over the same course and distance were the Juniors (16-19). Matthew Bailey won the boys’ race in a time of 1:10:56, from Daniel Goh in second and Jonathan Tay in third. Keeping it in the family, Sasha Bailey claimed the girls’ Junior crown in 1:20:20, from Claudia Lim and Farr Dyana Arffin in third.

Aaron Shane Tan was the fastest male in the Youths’ race (12-15) over a 200m/12km/1.5km course, with Ralph Eduard So and Adi Shazil Azree sharing the podium with him. Like Tan, the female Youths’ champ Zoe Bowden is no stranger to the winner’s circle, and this time she was a clear victor ahead of runner-up Robyn Jenkins. Dayanee Kunaseelan took third place.

The final events of the first day’s action were the Kids’ contests (8-11), raced over a 100m/6km/750m distance. Tak Long Yip was the boys’ champ, holding off a fast-charging Jackson Campbell for the win, with Thomas Leetham finishing third. The girls’ crown went to Syrah Ruth Uy, from Zoe Albury and Brodie Horn.

Another beautiful morning welcomed the athletes for day two of the multisport fest and first up on the Sunday was the Standard Distance race (1.5km/36km/10km) for men and women, the blue-ribbon event for age-groupers. Adding extra spice to these races was the fact that National Champion titles were up for grabs for the fastest Singaporean male and female.

The waters off the East Coast are of variable quality due to Singapore’s status as a super-port, and while the visibility was a little murky, that didn’t stop any of the eager athletes from plunging in once the hooter sounded.

The men were first and with the field spread across four waves as is the norm in age-group racing, it again proved difficult for the athletes to know exactly where they stood, so the only option for the leaders in each wave was to go hard.

However, when the men’s race was all done and dusted there was a clear winner in the shape of Charlie Epperson. His superb time of 2:05:17 was a full six minutes than runner-up Sylvain Labattu, which surely discounts any chance that Labattu might have been able to stick with Epperson had they raced head-to-head. Taking third place in the overall standings was Jonathan Calver.

The other big winner was Adrian Ng, whose sixth-placed performance saw him crowned the 2014 Singapore National Champion!

There was no wave confusion in the women’s race as all the competitors started together and one lady stood well out from the crowd in the shape of the mighty Kathryn Haesner. Having fairly dominated the local multisport scene this year, Haesner showed straight away that she meant business by completely obliterating the field in the swim, powered further away on the bike and then could afford to ease up slightly on the run for a decisive triumph. Indeed her time of 2:11:46 was the third-fastest of the day across both genders and was only four seconds slower than men’s runner-up Labattu.

To further underline how good a performance the 38-year-old put in, only five female pros went faster in Saturday’s race.

The runner-up to Haesner on the day was Vanessa Colless who overcame a relatively poor swim to charge through the field on the bike and run legs. Third place went to Nicola Donnelly.

Singapore’s Tan Yi Zhen finished fourth and with it she won the National Championship.

The action at the 2014 Singapore International Triathlon concluded with the ITU Asian Junior Cup, where the stars of tomorrow competed over the Sprint distance of 750m/18km/5km. Starting at 11:30am, they raced with the sun at its fiercest and it was the team from Hong Kong who proved the hottest.

The male race saw a Hong Kong clean sweep of the podium, with Kok Yu Hang outrunning his compatriots Wong Tsz To and Shuen Chun Kit to take the title.

The local multisport scene is now gearing up for the next race in the national championship series, the Singapore Aquathlon, 27 September, before the series finale the Singapore Duathlon, 22 November.