Asia’s top triathlon festivel is back! 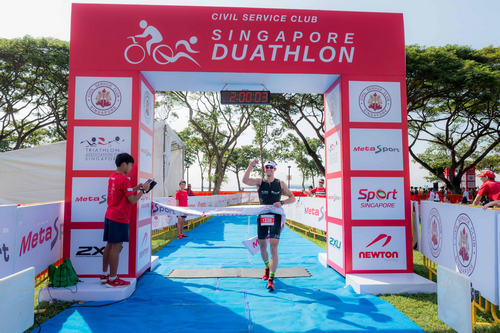 Guillame Rondy and Yiwei Luo left the rest trailing in their wakes as they triumphed at the 2015 Civil Service Club Singapore Duathlon on a hot and sunny morning last Saturday at the East Coast Park.

Duathlon differs from its multisport cousin triathlon in that instead of an opening swim, the first leg is replaced by a run, with the run-bike-run generally regarded as being the much tougher of the two disciplines. The main titles at the 2015 Singapore Duathon were competed for over the Standard Distance, a 10km-36km-5km affair, with a wave of elite athletes kicking off a packed program of races at 8am.

Indonesia’s Oscar Feryanto and Ng set the pace on the first run, which comprised of two laps of a 5km loop. The pair soon separated themselves from the rest of the elite wave, with Rondy wisely deciding to run at his own tempo rather than try to stick with the extremely fast leaders. It was Feryanto who hit T1 first in a time of 38:28, a full 30 seconds ahead of Ng, with Rondy leading the chasers in almost two minutes behind the Indonesian.

While a good runner, the bike is Rondy’s best weapon and the Frenchman put it into action as soon as he hit the course, which consisted of a 6km loop that had to be tackled six times. Rondy caught Ng by the end of the first lap, while Feryanto lasted out front for two more circuits before Rondy passed him too to take the lead, which he never relinquished. His dominating bike leg of 55:25 was the fastest of the day and equivalent to an average speed of 39kph, no mean feat on a crowded and quite technical course.

The Frenchman, who also won the 2015 MetaSprint Series Duathlon in March, had a nearly two-minute advantage over Feryanto as he hit the run course for the final 5km. He pushed hard until the turnaround point, only then allowing himself to take the foot off the pedal a bit when he realised he had a virtually unassailable lead. His time as broke the tape to take the title was 2:00:03, with Feryanto crossing the line in second some two and a half minutes later.

Ng finished third but he had to work hard for that final overall podium place as he was nearly caught by a fast-charging Jeremy Snoad on the bike leg. A strong second run, though, saw him home comfortably in a time of 2:07:34, which was good enough to give him the title of National Champion for the second year in a row.

Rondy was understandably happy with how the race unfolded as he explained how everything went to plan.

“My legs feel good, but I had forgotten what it feels like to race as I hadn’t raced since the end of August,” he said. “But it wasn’t easy, it’s never easy. I just aimed for 4:10s pace in the first 10km, so I managed that, which was good. I was about a minute behind the two guys in front, but that was fine.”

“Then the goal on the bike was 250 watts all the way. I hit 255 watts so it was just what I wanted. I caught the first guy (Ng) halfway through the first lap, it was a surprise to catch him so soon, and then I caught the leader (Feryanto) at the end of the third lap. He tried to stay with me a bit, but I just put the hammer down for half a lap and then when I reached the u-turn he wasn’t there anymore.”

“I didn’t know how far ahead I was when I hit T2 so I went out hard on the first 2km until the turnaround point to make sure he wasn’t right behind me. When I saw he was quite far back, I knew I could just bring it home. So my last 2km were a bit slower, but I kind of knew I had it in the bag so there was no point in hurting myself.”

Yiwei Luo’s route to the women’s crown was similar to Rondy’s in that she trailed after the first run leg. The early leader was fellow Singaporean Xiang Yi Wong, who covered the opening 10km in 47:16, a full two and a half minutes ahead of Luo, with Leslie Dang Ngoc a further 30 seconds back.

The familiarity to the men’s race continued with Luo taking two laps of the 6km bike course to catch and then pass Wong. Going onto the final 5km run, Luo had a two-minute lead, but that wasn’t from Wong or Ngoc, rather it was Australia’s Vanessa Lodge who had moved into the primary chaser’s position by virtue of the fastest female bike split of the day.

Luo was too strong for all her rivals, though, and was never threatened during the concluding run as she came home to take the title in a time of 2:27. Lodge faded on the run allowing both Wong and Ngoc to move into the final podium places, with Wong taking the runner’s-up spot over two minutes behind Luo.

The Standard distance done, the race-day schedule moved to the shorter-distance races, with Junior, Youth and Kids national titles on the line.

The Juniors raced over the Sprint Distance of 5km-18km-2.5km, with Cedric Chua and Christy Suriadi crowned the male and female Singaporean Champions respectively.

Overall, the three fastest men over the Sprint Distance were David Praire, Brad Clarke and Jerome Besnaud. While among the women, Cheryl Chan took first place, with Socheata Ung in second place and Madelaine Marriage in third. Of those six, only Chan was Singaporean but no national titles were presented for the adult Sprint Distance race.

The course for the Youths race (those aged 12-15 years old), featured a 1.5km run followed by a 12km bike and another 1.5km run. The fastest male was James Corbett, who finished 100 seconds ahead of Edward Lee and Jayden Lilley. Corbett’s performance was notable in that he came from the 12-13 sub-age group, as did Lilley. Lee was crowned National Champion as fastest Singaporean.

The fastest female Youth was Elizabeth Le Min Liau, and being Singaporean she was also crowned the National Champion. Ria Nakahara was the runner up, with Rachel Seet Huitling in third. Remarkably, all three fastest girls were from the younger 12-13 sub-age group.

Last but not least were the Kids contests, which were raced over a 750m-6km-750m course. Santiago de la Flor Emerged as the fastest boy, with Roughan Gaetz in second and Daniel Lucke in third. Tania Zi Xuan Thong took the girl’s title ahead of Natalie Hunter and Isabella Lowness. Girls’ champ Thong was actually the second-fastest of all the kids, finishing only six seconds slower than boy’s winner Flor!

Full results, for the 2015 Civil Service Club Singapore Duathlon, including those for the new public sector employee categories, can be found at www.singaporeduathlon.com. Next up on the Singapore multisport scene is the 2016 MetaSprint Series, with the Sprint Aquathlon kicking things off on February 21 at Sentosa. Go to www.metasprintseries.com for details and to register.