Selukov blows away the field to repeat as Duathlon champ 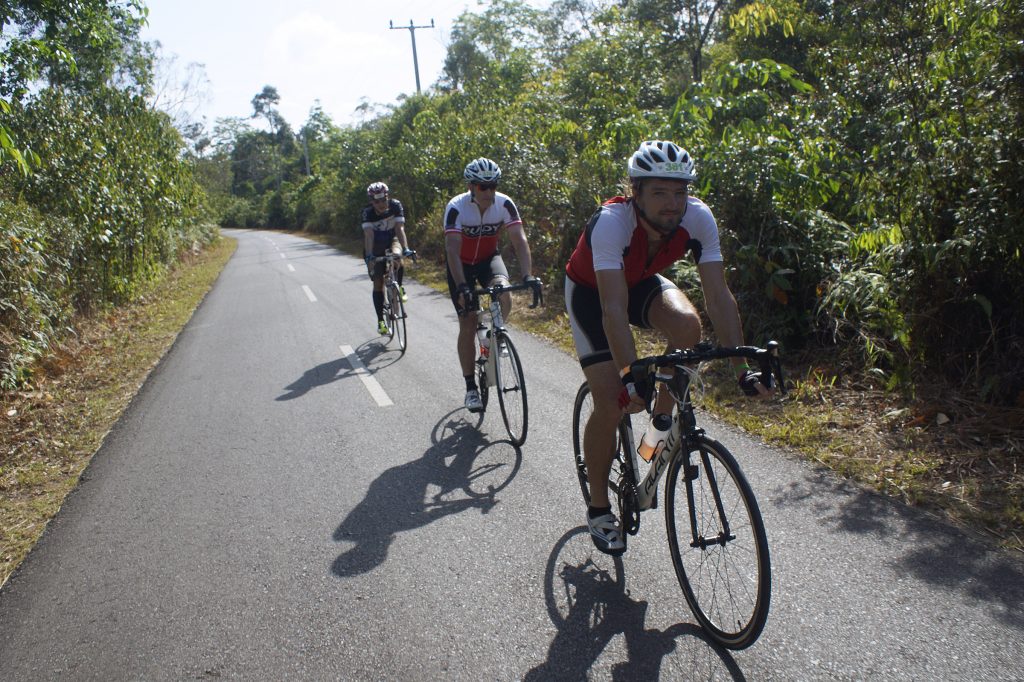 The sun put in a starring appearance as an astonishing 1500 athletes took part in the NewMoon KHcycle MetaSprint Series Duathlon on March 24, but it was Arnaud Selukov who shone brightest, powering away from the field to retain his title at Sengkang. A relative newcomer to the Singapore endurance scene, Tia Roberts, took the women’s crown, and with both champs coming from the 40-49 age group, youth was put firmly in its place, reversing the trend from the series opening Aquathlon.

The second leg in the MetaSprint Series returned to its traditional spot adjacent to the Sengkang Sports and Recreation Centre, with a slightly modified course. Also different for the competitors and the big crowd of spectators was a dry transition and festival area, a welcome change from the quagmire that has greeted them in recent editions of the race. It was blistering hot even as the Elite wave blasted off at 8am, but that didn’t stop them from delivering some remarkable performances.

Such is the calibre of Selukov, his third place in the Aquathlon was a relative setback for him, leaving him determined to right matters in the run-bike-run affair. He did so in style, leading his main rivals after the first 3km run, then extended his lead with the fastest bike split of the day. This allowed him to take the gas off a bit in the final leg to record a 32-second victory over James Middleditch. Aquathlon runner-up AJ Anderson took third.

“I’m happy with the win, although it was quite hot, quite tough. I don’t really want to say I was disappointed after the aquathlon, but AJ is a very strong competitor and I promised to pay him back after that race,” Selukov said with a big smile.

Selukov flashed another grin when asked if he was going to win the Sprint Triathlon and the series on April 21, before replying with one simple word: “Sure!”

“Of course I will try to win, that’s why I’m there. But it’s not about the prizes, it’s about the competition and we know it’s harder to win year after year. I’m 44 now and I’m not going to keep getting faster,” the Frenchman modestly added.

While some of his younger rivals might take heart from that final bit, it’s doubtful if the flying Frenchman is going to slow down any time soon.

Roberts used a powerful bike leg to overcome the front-running Winona Howe in the women’s race, then showed she hadn’t dug too deep on that 20km ride by striding away from the field over the last 3km to win by over a minute from defending series champ Howe. Winnie Selukov took the final podium place in third.

Asked if she expected to win the race, the Aussie replied in the negative.

“No, not at all actually. I’ve only done three duathlons in my whole career,” Roberts said post-race, adding that it was a great course but that “it was just so very hot.”

It seems as if her limited experience with duathlons has left a positive impression on her, as in sharp contrast to the men’s champ, who readily admits he finds the run-bike-run format to be the toughest of the multi-sport disciplines, Roberts quite enjoys the leg-busting challenge.

“I quite like them because running is the easiest bit for me, so in that respect they’re good,” she said.

Her win puts her in pole position for the overall title and having finished fifth in the Aquathlon, it’s obvious she can swim a bit too. She’s not counting her chickens, though, replying only with a coy “we’ll see” when probed about her chances of winning the triathlon.

The Youth races, for athletes aged 12-15, competed over a 1.5km-10km-1.5km distance, quite a grueling prospect for the youngsters, but the respective male and female champs made it look easy. Tim Hagermeister led after the first run, increased his lead with the fastest bike split, then eased his way to the male Youth title. Aquathlon winner Aaron Tan came second, with Kyle Izzo putting in a blistering final run leg to chase down and pass a rival for third place.

Zoe Bowden showed her Aquathlon win was no fluke, winning by over two and a half minutes from Sasza Koczanowski, with Eve Singer rounding out the podium places. To put the quality of young Ms Bowden’s performance into perspective, she beat all but the first three of her male counterparts.

The youngest stars of the day, the boys and girls of the Kids races (ages 8 to 11), faced a 500m-5km-500m course and delivered another uplifting spectacle for the crowd. Caleb Jones took the boys title, followed by Samir Varma and Jackson Campbell in second and third respectively. Girl’s champ Emma Middleditch went one place better than her dad James to claim family bragging rights. Elizabeth Le Min Liau was the girl’s runner-up, with Ashley Jade Khoo taking third.

The battle for the overall MetaSprint Series comes down to the grand finale, the Sprint Triathlon at Changi Beach on April 21. The titles are calculated on points gained in the Triathlon and either the Aquathlon or Duathlon. Selukov looks a good bet to retain the men’s overall crown, although Middleditch, Anderson and some of the younger Singaporean athletes will give him a run for his money. Female defending overall champ Howe, an accomplished swimmer, will fancy her chances to repeat, but Roberts will have taken confidence from her Duathlon win.

Such is the popularity of the New Moon KHCycle MetaSprint Series, that the triathlon has already sold out. So while it’s too late to register, an exciting morning’s racing is guaranteed, so Changi Beach will be the place to be for some first-class action.

If you’ve missed out on the MetaSprint Series Triathlon but are in need of some racing action, the Bintan Triathlon Festival, also run by MetaSport, still has spots available in its Sprint and Olympic distance races. Check out www.bintantriathlon.com for full details and to register.