Youth beats experience as Tay and Wong dominate at Sentosa 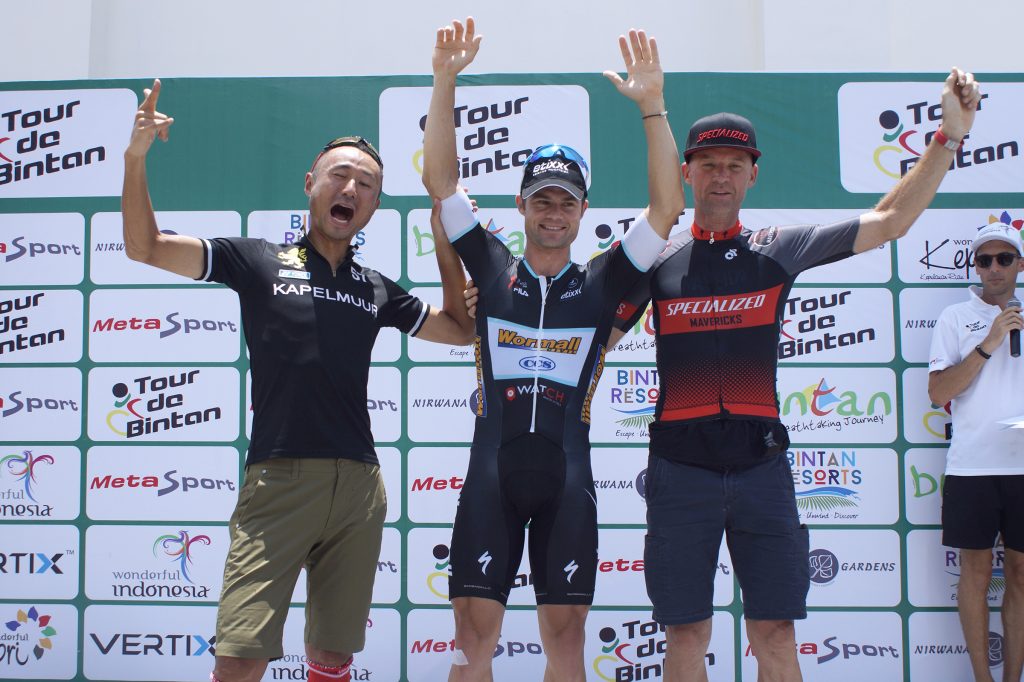 Singaporean youth came rushing to the fore at the NewMoon Khcycle MetaSprint Series Aquathlon on February 24, with Adriel Tay comfortably holding off former pro AJ Anderson and perennial favourite Arnaud Selukov for the win in the men’s race on a blistering hot day at Sentosa.

It was the same story in the women’s race as former Youth Olympian Clara Wong put in a dominating performance to claim the crown, ahead of Brittney Iverson in second and Winona Howe in third.

Following on from the success of the 2012 MetaSprint Series, interest in this year’s opening leg of the three-race event was huge, with registrations up a third at over 1,700. So Palawan Beach was already jam-packed with competitors and supporters creating a carnival atmosphere as the elite wave splashed things off at 9am. The concept of letting the best athletes go first provides a chance for the rest of the field to see what lies ahead. And with Palawan Beach’s bowl-like feature and the M-shaped course, they were treated to a great spectacle as a big bunch of the elite men and women stayed in a frothing pack for most of the 750 metres.

A string of swimmers forged ahead of the pack, though, among them the 21-year-old Tay. The NUS student was one of the first out of the water. Onto the 5km run course and Tay quickly pulled away from the other leading swimmers and looked set for an easy win. Selukov, some 45 seconds behind after the first leg, threatened to mount a challenge but when Tay saw the defending series champion coming the other way at the Tanjong Beach turnaround, he found another gear and strode away for a comfortable win in a total time of 29 minutes 30 seconds. His winning margin was 17 seconds but it was a hard-charging Anderson who took the runners-up spot, catching Selukov just before the end of the race and beating him by two seconds.

Tay, who dipped his toes into the Elite ITU racing scene in China last year, was delighted with the win.

“I was fairly confident of finishing among the top few, but I knew there were strong competitors and some in the Elite wave who I was not familiar with, so winning was definitely a bonus for me,” Tay said after the race.

He plans to race the whole NewMoon Khcycle MetaSprint Series but doesn’t rate his chances highly in the next leg, the Sprint Duathlon on March 24, as “the bike is not my strongest discipline”.

This will be music to Selukov’s ears, as the Frenchman was already optimistic about reversing his fortunes even without hearing of Tay’s supposed weakness.

“Sure I am confident. The Duathlon will allow me to play with my favourite toy, my bike, and my run is OK at the moment, so we’ll see. Although nothing is ever done before the finish line, especially with a competitor of AJ’s calibre to deal with,” Selukov said, referring to Anderson.

In the women’s race, Wong, also representing the National University of Singapore, had a much more dominating victory, finishing 59 seconds ahead of Iverson. It was another close call for second place, though, as the runner-up beat third-placed Howe, last year’s women’s overall series champ, by just one second.

The day wasn’t just about the elites, though. The other 1,000+ competitors battled for the various age group crowns or, as was the case for the vast majority of the athletes, took part for the sheer challenge and enjoyment in what has become one of the most popular events on the local multisport circuit.

The champ Tay offered glowing testimony as to why MetaSport consistently puts on great events such as the Aquathlon.

“This was definitely one of the best organised races I’ve taken part in. Well marked out courses and adequate water points. The front cyclist leading the pack also did a great job in clearing the path ahead and ensuring runner’s safety“ he said.

As always seems to be the case with MetaSport occasions, the Youths (ages 12 to 15) and Kids (ages 8 to 11) events were the most thrilling races of the day, with close finishes aplenty. Over three hundred of the youngsters took part.

The first three in the male Youths race – Aaron Shane Tan, Zak Zestera and Robin Staes-Polet – were separated by just six seconds. The female Youths champ was Zoe Nathasa Bowden, followed by Michelle Lee and Katie Mullan. Special mention to young Katie, as she was actually racing in the 12-13 category.

The outcome of the Kids races was remarkable; not only were the fastest two finishers separated by mere centimetres, they were also girls. Coline Staes-Polet pipped Emma Middleditch on the line, with both girls given the same time, while Paloma Canos Cervera took third place.

Valentin Van Wersch, Caleb McMahon Jones and Lachlan Pallister were the first three in the boys Kids contest, in what was another close race, with just eight seconds between first and third.

With the Duathlon the next race of the NewMoon khcycle MetaSprint Series, the format of a 3km run/18km bike/3km run presents a different challenge altogether for the athletes and could very well see different podiums across the categories.

The third and final leg of the series is the Sprint Triathlon, raced over the classic 750m/20km/km distance. It takes place at Changi Beach on April 21.

The overall series titles are calculated by combining points gained from the Triathlon and either the Aquathlon or Duathlon, so even if you missed the first race in the series, it’s not too late to register and challenge for the championships. As well as the prestige offered by finishing first, second or third in any of the races, great prizes are awarded to the podium-placers across all age groups, throughout the series, including khcycle vouchers. The overall series winners receive top of the range range Ebel timepieces from Cortina Watch.

For further details on the Duathlon and Triathlon and to register, go to www.metasprintseries.com. A link to the full results of the Aquathlon can also be found there.