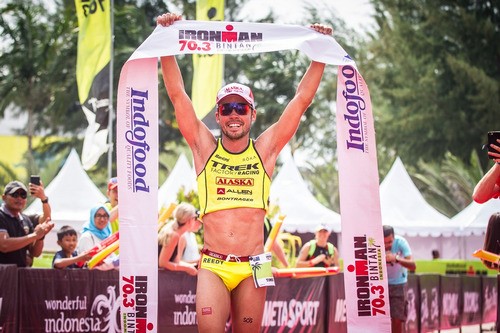 August is traditionally IRONMAN time on the island of Bintan. A time where athletes roam the race expo full of anticipation, local volunteers proudly don their yellow crew shirts, and school kids’ faces light up with glee as cyclists zoom past their villages. This year, however, is a little different. And whilst there are no athletes racking their bikes in transition, or placing numbers on their arms, we can reflect on the times that elite and amateur triathletes all graced the island in search of their dreams.

Bintan has hosted some of the biggest names in triathlon, starting off when it was called MetaMan and offered one of the largest prize purses in the sport. This didn’t abate after the event changed to IRONMAN 70.3 Bintan in 2015. But it’s not all about the professionals, rather the amateur athletes who brave the scenic but challenging course, each with their own story and personal goals, and each showing the true IRONMAN spirit.

2019 saw Garth Barfoot, at 83 years of age, take the spotlight, receiving the biggest ovation of the day when he crossed the finish line.  The Kiwi came to the race set on qualifying for his hometown world championships in Taupo, but unfortunately finished up short – succumbing to the hills and heat of the island. However, his smile and effervescent energy will be remembered for years to come.  Read more about this great man here.

One of the athletes who had the whole crowd behind him in 2017 was Yee Sze Mun from Malaysia. Known affectionately as “the bumble bee”, he has been racing long distance multisport around the world since turning 50, and he has no plans of slowing down. Chatting happily to other athletes with a beer in hand at the welcome dinner his attitude to racing left everyone inspired. Read more here. 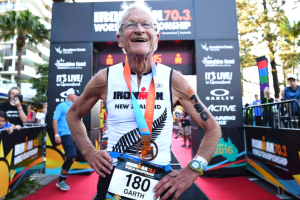 A World Champion comes to town, and course records are set 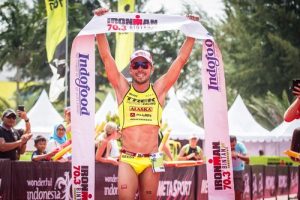 2017 was a year to remember, as a pair of New Zealand professional triathletes in Mike Phillips and Amelia Watkinson each broke course records on their way to claiming the top prizes.

Phillips battled a competitive men’s professional field to win in 3:54:37, a 2 minute and 41 second winning margin over Italian Domenico Passuello. 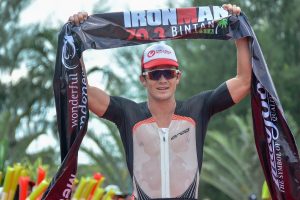 Amelia Watkinson won her title in stunning start-to-finish fashion, finishing in 4:20:54. She dominated the women’s field with a winning margin of 12 minutes and 19 seconds over Anna Eberhardt from Hungary. 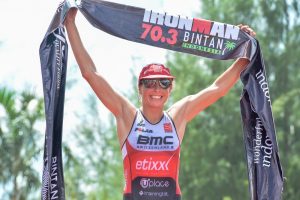 Croneborg finally takes the win, and a champion with an orchestral passion

After years of being the “nearly” man in Bintan, Fredrik Croneborg finally climbed to the top step of the podium in 2016 with a thrilling win. The Swede caught long-time race leader Matt Burton of Australia with 6km to go and from there strode on powerfully for the win, with Michael Fox in third. A well executed plan and a job well done for Croneborg. 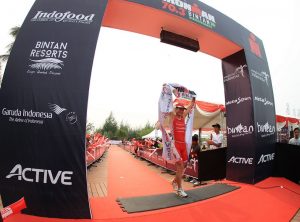 Australia’s Brad Kahlefeldt and Gina Crawford from New Zealand triumphed at the inaugural IRONMAN 70.3 Bintan, held in 2015 at its new home in Lagoi Bay. Former ITU star Kahlefeldt used his short-course swimming prowess to take the lead early and then his running speed to close out the win.

The Ironman legend in Crawford dug deep to keep her chasers at bay and take a popular win. Her talents are varied, we learned, with an impressed crowd at the welcome dinner hearing about Crawford’s background in music, as a violinist with the Christchurch Orchestra. She retired from the sport the year after Bintan, excited at the prospect of returning to her love of music.

The Indonesian athletes always receive a big cheer from the locals on the island, and two talented stars Andy Wibowo and Inge Prasetyo have been long-term supporters of the event.  In 2018 we were fortunate to have them both toeing the start line.  In a surprisingly similar fashion, they both led out of the swim and stayed in the running for the top places till the end. They placed 3rd and 5th overall respectively in their gender competitions, which crowned them the “2018 Indonesian Champions”.

2019 saw age-group athletes take the spotlight, with an absence of professional athletes for the first time in the race’s history.  An elite wave consisting of the top athletes, based on previous performances, was created.  These athletes were treated to the “pro experience” – having their own race start, priority bike racking in transition, and champagne ceremony on the podium.

Many age-group performances have been impressive over the years, but Olivier Godart’s in 2017 is a stand-out. The athlete from Luxembourg finished 4th overall, beating a number of pros. His 21km run split of 1:16:55 was the race-best, 3 minutes and 58 seconds faster than anyone else on the course. He was in Bintan using the race as preparation for Kona.

Sugarcane makes a lot of noise, plus a wedding proposal

Sugarcane have been long-time supporters of the event, but none-so-much as in 2017 when the venue was a flurry of green. There were over 100 Sugarcane athletes from the Philippines (including 31 teams) joining the race, and if you didn’t see them, then you certainly heard them.  Cheers emanating from the spectator area were deafening as every team member ran past. 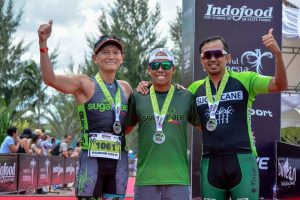 The action wasn’t always on the course however, with love in the air in 2017 when Ben Maming proposed to Mayden Gacute at the finish line after his race.  With the help of the MetaSport team there were flowers, champagne, confetti and of course – the ring! As if the pressure of becoming an IRONMAN wasn’t enough….! 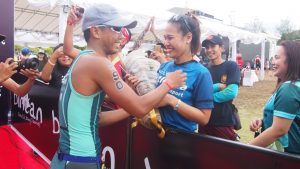 Why you should thank Cameron Brown

When we started MetaMan Bintan in 2012, Cameron Brown agreed to be our ambassador. For the launch in 2011, he came to Bintan and led a training camp. After riding the bike course, he pulled us aside and commented that the route was too hard to appeal to a wider triathlon audience. Even the pros would struggle with the endless rolling hills in combination with the tropical heat and humidity.

His comments sent us back to the drawing board. We cut out a road in the interior of the island and replaced it with the ‘Queen K’ Highway, reducing the elevation for one 90km-lap to 600m. You have Cameron Brown to thank for that. The profile of the bike course hasn’t significantly changed since.

Cameron Brown came back to win the 2014 edition of MetaMan Bintan. He beat defending champion Courtney Ogden in a battle of wills after running shoulder to shoulder for the first half of the marathon. Fredrik Croneborg had to settle for 3rd again after puncturing on the bike.

The biggest prize purse in the sport of triathlon?

The total prize purse for the second year of MetaMan Bintan was raised to USD 300,000 in 2013. An amount that was only exceeded by the Ironman World Championships at the time. The enormous prize purse didn’t go unnoticed, as the event was featured on all major triathlon media. Courtney Ogden (AUS) and Caroline Steffen (SWI) won and each collected a cheque of USD 40,000 for their victory.

On rare occasions, the Bintan events get in the way of the local wildlife. In 2013 the men’s Champion, Courtney Ogden, was bitten by a snake on his way back from the awards ceremony. That was a first for the medical team, and the only time so far. Fortunately, the snake was not venomous and Courtney Ogden lived another day to enjoy his USD 50,000 cheque.

Fortunately for him, it occurred after the event. A cyclist of the Tour de Bintan was not so fortunate when, on his way to the start line, a monkey jumped in his front wheel.

Although Courtney Ogden had won Ironman Busselton in 2010, he did not start as the outright favourite at MetaMan Bintan in 2013. Injuries had kept him from reaching his best form since, and more was expected from ITU star Courtney Atkinson, recent Ironman Cairns Champion David Dellow and the young Ironman champion Tim Van Berkel. Atkinson dominated the swim and bike and held a 4-minutes lead to the trio of Berkel, Ogden and Dellow at the start of the run. However, Ogden produced a run that was 10 minutes faster than anybody else in the race. Ogden was elated. The finish photo tells it all. 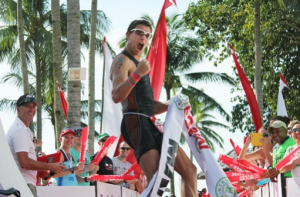 Gina Crawford’s MetaMan and Ironman Bintan victories were very different. In 2014 she made her move on the run, quickly erasing the 5 minute deficit to strong cyclist Diana Riesler, to take the final MetaMan Bintan crown. In 2015 she started the run in the lead and had to push hard on the run to hold off a challenge from Caitlin Snow and Katey Gibb.